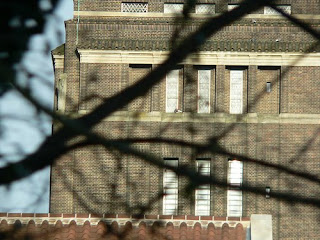 Credit to Florrievassingbourne for the image
I have used Flickr in the past mainly to look at other peoples pictures but always liked the principle behind it. It seems like the ideal way to see your friends photos without waiting for everyone else to look at them first.
I have seen some of the photos of the UL on Flickr before and have been quite impressed with the quality of some. I am not sure that I agree with anyone being able to take photos in the UL but with cameras on phones etc, I am not sure how much we can do to stop it. I know I have had to ask people not to take pictures before but it's a matter of catching them in the act.
I think that the virtual tour is a great idea, especially for places like the UL. There are places that the students do not get to see but even more that the general public never get to see. I also think that showing students around the library in a virtual way helps to make it less intimidating when then actually turn up!
I have to wonder about the tags used in Flickr though. The above image was tagged "Pigeons" which I had to squint to see on the tower!
Posted by Claire Sewell at 20:56