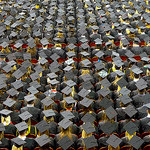 This morning I found out that my dissertation has passed and I'm now a qualified librarian! It's been a very long and at times very difficult journey but I'm glad that I stuck with it. I know that it's easy to get bogged down in assignment writing and lose sight of the goal when you're actually studying but it does feel incredible to have finished.

I think there has been some debate in the past about how useful the degree is. For my part I think that whilst it gives you a solid grounding in the theory you also need to do something practical. Having a degree doesn't make you a good librarian but putting it into practice does. I freely admit that the main reason I undertook a degree in the first place was that I was being overlooked for jobs in favour of others who had one. Although it's not the ideal situation to begin studying, I think it was an important step. Many more people are undertaking degrees now and with the job market as it currently is anything that can get you through to the next stage of the interview process is a good thing. One positive thing I will say about doing my degree is that it has given me a greater awareness of the profession which in turn has led to many exciting opportunities. I've also met a great many wonderful people who I hope to maintain contact with, both personally and professionally.

I've decided to continue my training by undertaking CILIP Chartership (although by the time I've completed it will be known as something else due to changes at CILIP). I'm really enjoying the process so far as it gives me a chance to explore some practical areas not covered during my degree but directly relevant to my job.

Good luck to anyone currently studying or waiting anxiously for results - there is light at the end of the tunnel! To anyone thinking about doing a degree I would say think carefully about finding the right course for you and be open to any opportunities along the way. You never know where it might get you!

Email ThisBlogThis!Share to TwitterShare to FacebookShare to Pinterest
Labels: chartership 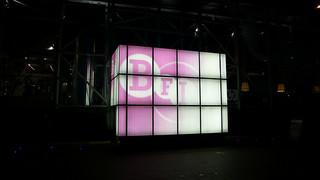 Posted by Claire Sewell at 13:40 No comments:

Any cataloguers out there will know that there has recently been a transition to a new cataloguing standard - RDA (Resource, Description and Access). I work at Cambridge University Library which has been using RDA since it's introduction at the beginning of April. This has been an interesting time for us and although it's been hard work I've enjoyed learning something new. 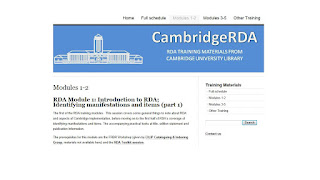 Before Cambridge began using RDA, cataloguers had to undertake some intensive training, including the theoretical background (FRBR), RDA basics and hands-on practical sessions. This training has recently been made available as a creative commons licensed resource on the CambridgeRDA site (which I'm happy to say I had a small hand in creating). Resources on the site include recorded Powerpoint presentations with audio and practical exercises. We hope that it will be useful to people who are currently putting together training programmes for their own staff or those that just want to know a little more about RDA.
CILIP Cataloguing and Indexing Group have also put together a list of other available RDA training that people might find useful. This can be found here.


I hope that these resources are useful to people, and if people know of any more then please leave me a comment. I think that there are a lot of really useful materials and discussions available out there about RDA and hopefully the cooperative nature of cataloguers will mean that we can make the transition as smooth as possible!