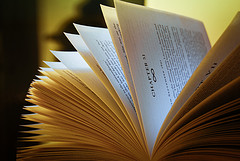 It's been a roller-coaster few weeks for me. My secondment to Reader Services ended and I returned to the English Cataloguing Department in a lower grade to the one I left which was, needless to say, demoralising. I then successfully interviewed for a new job in a different Library department.

On Monday I move to the Office of Scholarly Communication here at Cambridge to work as Research Skills Coordinator, a new role that I will be able to really make my own and which fulfils a lot of my professional goals. I'm beyond excited to start my new role (not least as this is the first full time permanent job I will ever have held!) but it's also a time tinged with a little bit of sadness. I am leaving behind cataloguing as a day job which will be a big change for me. I have spent most of my career working in a cataloguing role and it will be different to think that I won't be going back to it at some point. Of course you can never say never but I think the time has come for me to move on.

A few years ago I was as set as I could be on making cataloguing my niche in the profession and couldn't imagine doing anything else. To some this may seem like a boring ambition but I think it's a truly exciting time for the profession with the advent of initiatives such as Linked Data and BIBFRAME. I will still be involved with the CILIP Cataloguing and Indexing Group for as long as they will have me so I will be able to keep my hand in that way and I think many of the new developments will tie into my own work. A good thing about all this change is that it will hopefully mean more blogging, something I haven't had much time to do recently! This will be a new area for me professionally as well as an exciting direction for the profession and I'm keen to find out all I can about it.

What I have basically realised is that change doesn't have to be scary. People change and adapt over time and what you really want today might not be what you want in a year. My advice to all new (and maybe even not so new) professionals is to keep your options open and don't pin yourself down to only one part of the information industry. There are a lot of facets to the profession so go out and explore them - you never know what you might find!

Email ThisBlogThis!Share to TwitterShare to FacebookShare to Pinterest
Labels: career

One of the highlights of my secondment to the Reader Services division has been the chance to get actively involved in outreach activities. I've done many tours and volunteered at a lot of events but this year I bit the bullet and decided to organise my own event. 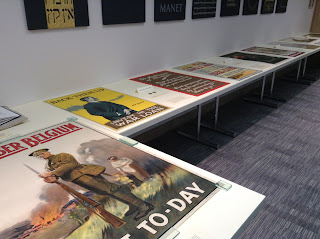 We have many outreach opportunities in Cambridge including the Festival of Ideas which was established in 2008. The festival sets out to challenge ideas around a particular theme which this year was Power and Resistance. This seemed like a good fit for the work I wanted to do to show off the Library's collection of World War I propaganda posters. Being a history graduate propaganda has always been a subject of interest to me and I think it has enormous relevance to life today.

My event was entitled Patriotism and Pin-Ups to reflect both the content and theme of the display. In addition to posters I managed to find a selection of war propaganda material from the collection. Amongst the items on display were:

Putting together the exhibition was a great way for me to get deeply involved in a subject and do some historical research. It was also a fantastic way to show-off a little seen part of the collection to the public. I couldn't include all of the posters I wanted to for space reasons but it was great to be able to show what I could and it got a lot of people talking.

I also experimented with Vine to create videos of the material on display. I've been hearing a lot about the app recently and how it can be used to create visuals of tutorials or exhibitions so I wanted to give it a try. Vine allows you to create short, seven second videos that play on a continuous loop and can be shared with others on the usual social networks. The app was simple to install on my tablet and I was making videos in minutes! My results are shown below:

This was the first time I had developed an outreach event from start to finish and many lessons were learnt. My top piece of advice would be to always leave yourself more time than you think you will need. Life gets in the way sometimes and things like writing captions will always take you longer than you think! If you are able to participate in something like this then my advice would to be to go for it. We are lucky in Cambridge as there are so many opportunities to get involved but if that isn't the case where you are then why not launch something? It doesn't have to be expensive or time consuming - it could just be an online display. The important thing is that you get your material out there and share it with interested people. You never know what might come of it! 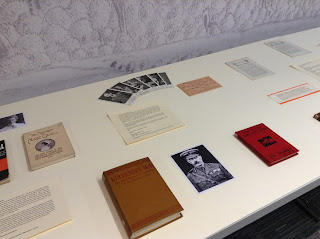 Posted by Claire Sewell at 11:00 No comments:

Email ThisBlogThis!Share to TwitterShare to FacebookShare to Pinterest
Labels: outreach

Going Beyond the Numbers: Measuring the Impact of Social Media Marketing in Your Library

Last month I presented the results of my dissertation research at the CILIP Multimedia Information Technology Group Conference in Sheffield. It was my first time at the conference and it was a great couple of days where I learnt a lot. It was also my first time presenting to a group who had actively chosen to attend my presentation and it was lovely to see so many people turn up. I had a very engaged audience who asked a lot of questions, even though they wanted to get out and have their lunch!

For those interested my presentation is below. I experimented with using Canva to create a presentation which had positives and negatives so I would be interested to know how others find it.

The full dissertation on which this presentation is based can be found here.

Going Beyond the Numbers: Measuring the Impact of Social Media Marketing from Claire Sewell
Posted by Claire Sewell at 14:38 No comments: