In which I save my sanity...

As someone who has just written what feels like a hundred essays and is about to embark on a dissertation, referencing software is an absolute Godsend! You could cut me off from Facebook, Twitter and every other application that has been covered to far and I could learn to live without them, but cut my access to Endnote and I may have to kill you!

I use Endnote since I get free access to the web version from my university and it has been a while since I have explored any of the alternatives. I do take on board the point that it is always good to have an awareness of alternatives since the same thing won't suit everybody.

I've been experimenting a little with Zotero, which I have used a little before. I like the interface, which as it says in the video is very ITunes like. I'm not really keen on only being able to use it with Firefox though as I tend to stick with Internet Explorer and I have to remember to open the right browser to be able to use this software. I do like being able to access the full text of an article though - a real time saver.

Next I explored CiteULike since this is one I haven't used before. Since I have access at least three computers (I'm not rich - I just have multiple jobs) I like that it can be independent. I'm also quite keen on the group element but I might wait to explore this further since I'm having enough trouble focusing on the groups I'm currently a part of. I'm not sure I would use it for essays since it only produces a single bibliography but it could be useful for those times when I'm doing online research and find something I want to bookmark. I could then collate this into one easy list to come back to later.

I think that this sort of software will become the norm for referencing, if it hasn't already. This means that anyone who works with users, especially academic users, will need to have a good working knowledge of each of the tools in order to help others make the right choice for them.

Posted by Claire Sewell at 21:37 No comments:

I've already tried Google Docs as part of last years 23Things so for my thoughts on that see here.

Having had a bit more of a chance to play about with it though (mostly for my very small contributions to the CPD23 project) I think it's great. Once you get to grips with the mechanics of it it makes you wonder why you would ever go back to email etc again for organising things. Wiki's work in much the same way although I have less experience in using them. I think that Google Docs is easier for the more techno-phobic amongst us to use since it's not so different from writing normal documents.

I like the idea of Dropbox, but mainly for my own convenience rather than trying to organise anything with others. I'm in the middle of a literature review for my dissertation so I find it really helpful to be able to store documents online. I have a laptop at home and two computers at work so needless to say, the little scraps of notes keep getting lost. Going electronic makes this process much easier (until there's a power cut!)

One word of caution though. Maybe I just haven't played around with the tools enough but there isn't an obvious way to see who has done what and when. Although this lessens the confusion in some ways since you just see the updated document, I think it's useful to be able to see who has made changes and go back to a previous version if necessary.

Overall I like these tools, but more for smaller group projects or personal use than library wide use.

Putting the social into social media

OK, so do I really have to write a long blog post when I have already written this weeks 'Thing'? It is certainly nerve wracking to know that so many people will be reading my post when this blog usually has about four viewers a month total. It's one thing to talk to such a small audience but quite another to broadcast your thoughts all over the world.

But that's the point of social media - to get your thoughts out there. It takes time, effort and persistence to make meaningful contacts on the social web but it is worth it in the end. I know many people who have made great contacts through applications such as Twitter and it has done wonders for their careers. Hmm, maybe I should be trying this...

Having read some of the responses to Thing 12 I agree with those who have highlighted how helpful social networking is for helping shy people to make contacts. This struck a chord with me since I'm painfully shy and find it really difficult to talk to people I don't know. Although this is getting better, being able to talk to people first before meeting them face to face is a definite bonus!

Do I need a mentor? 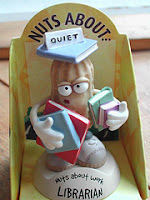 I sort of fell into the library profession in the way that I think most people fall into careers. I didn't really have any burning ambition to be anything and libraries seemed like a good fit for my personality. This turned out to be a serendipitous move since it turns out that I absolutely love my job!


Due to personal circumstances I wasn't able to start my library MA until a couple of years ago despite being ready to do it for some time. I'm just starting my dissertation and I think that research projects could play a big part in my future. There are so many questions that need answering and not enough hours in the day! Hopefully this will also be a way to advance my career as the normal routes don't seem to be working too well for me.


I'm definitely thinking about Chartership and had contemplated starting it already since I found out that your dissertation can actually count towards it. In the end though I decided to wait until I have finished one time consuming and stressful project before I attempt to start another one. Something I am looking forward to though...


I'm not really sold on the whole idea of mentoring in the workplace, but this could just be my experience from the places that I've worked. I prefer to make my own decisions rather than focus on what other people do. There have been times when I've needed a sounding board for work issues and felt that there was no one to turn to so maybe a mentor would have been useful here. I'll need one for when I do my Chartership so maybe that experience will change my mind? For now the position is vacant, all applicants feel free to apply...

Photo credit: moqub
Posted by Claire Sewell at 08:14 No comments: