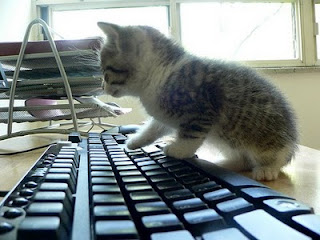 I start this week with a confession: I use Wikipedia all the time! I know that makes me a bad librarian but sometimes it can provide a very useful starting point.
I always thought of Wikis as just something like Wikipedia which was for mass usage rather than something that could be used for a library. However, this weeks Thing has shown me that it does have its uses. I take the point that email can be a slow way of organising things and Wikis could be a way of speeding up collaborations. When librarians have a project to organise it could save a lot of time and duplicated effort. I suspect that some librarians who are just getting used to email will take some persuasion before using wikis though!
I especially liked the idea of the online book club mentioned in the SlideShare presentation. I think that this would work well for public libraries that offer this kind of service to their users, especially for users who might find it hard to make the meetings such as mothers of small children.
I am not so sold on the idea of using wikis for user guides as I think that they could be open to abuse. I am sure that some students would think that it was hilarious to send new users on a wild goose chase around the building looking for the photocopiers or something. Until security has been improved I am not sure that this would be the best use for wikis. As the picture shows, ANYONE can edit them!
(Image credit: slava)
Posted by Claire Sewell at 11:08