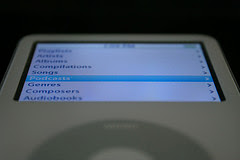 I really like the idea of podcasting. I think that the library could use them as introductions to the different departments or even the library as a whole. This would be especially useful for somewhere like the UL which has many departments of interest to different users. I have said before that I don't think users take much notice of newsletters or leaflets and podcasting would be another way of introducing them to the services. Maybe an introduction to the Reference Department or the Official Publications Department showing who they are and what they do. So many MP3 players are equipped with video now so a short video introduction could be made to each department for users to download when they needed. They could then take this with them when they visited the department. I think that users don't ask the obvious questions because they don't want to look stupid so this could be used as an alternative. This could also work for non-video podcasts. I would also like to see the library newsletter turned into a podcast format so that users can listen on the go.
Linking podcasts and YouTube videos to events at the library would be a good publicity move. This would give users who cannot physically get to the library a chance to see things such as the recent Sassoon exhibition at the UL. Maybe in the form of a virtual tour? This would certainly raise the library's profile.
I listened to the Goldsmiths podcasting tour which is similar to what I had in mind. I think it could be quite entertaining to watch all these new students walking around listening intently on their ipods! Hopefully this would encourage users who seem to have an aversion to asking for help/taking library tours to actually use the library during the year rather than just the two weeks before their exams!
(Image credit: D'Arcy Norman)
Posted by Claire Sewell at 11:13