Pin the Activity on the Research Lifecycle

Over the summer I ran the third iteration of the Research Support Ambassador programme at Cambridge. Every year I try to tweak the programme a little in response to feedback, getting rid of the bits that don't work and improving the bits that do. One piece of feedback I've had from previous runs is that participants would welcome a basic introduction to the scholarly communication landscape and how this relates to libraries. In response I ran the first Ambassador session as an interactive workshop called Scholarly Communication 101.

Part of this workshop is an activity designed to get librarians thinking about how their work supports the research community. It's kind of like pin the tail on the donkey but without a prize as there isn't really a correct answer! Participants are shown a basic research lifecycle and given a brief explanation of the different stages. They then have to identify which of the stages they feel their role most closely aligns to and indicate this on the lifecycle (using a small librarian graphic). Next they are shown cards representing various research activities (data management, literature searching, grant proposals etc) and asked to indicate with stickers which activities their library currently undertakes and which activities they feel the library should be working on. These activity cards are then attached to the lifecycle. The end result looks something like this: 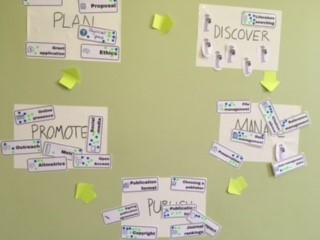 The point to this exercise was to illustrate to library staff who may be new to research support just how deeply both they and their library are involved in the research lifecycle. There is involvement at every stage through both new and existing services and the activity often provides a good jumping off point for discussions about the library's role in research support. I've run this exercise a couple of times and the results were quite interesting. Obviously what follows is a very non-scientific analysis of the outcomes from this activity but it does show some interesting patterns.

Which lifecycle stage do librarians identify with?
In fairness to the participants I asked them to only choose one stage to identify with but as expected they overwhelmingly went with the discover stage. There were a couple of librarians in the plan and manage stages but as a rule they tended to favor discovery. Given the established role of librarians this isn't a surprise and sparked useful discussions about the changing nature of library work.

Which services does the library currently provide?
Obviously this depends on the individual library and their audience. I'm also well aware that at Cambridge we have a well supported library system which impacts on the type and range of services we are able to provide. The results show that Cambridge libraries provide a wide range of services although staff had not always thought about them explicitly in terms of the research lifecycle. 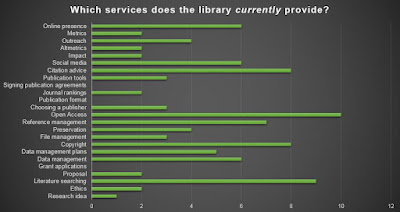 By far the most popular current services were Open Access (in this context taken to mean OA advice and training), literature searching, citation advice and copyright. Also popular were reference and data management and advice on social media. Many of these represent 'traditional' library services in an academic context so participants were fairly keen to claim them. Interestingly there were no results for advice on publication agreements or the right format for publication, both of which are key elements of the research lifecycle. In both groups this led on to discussions about whether librarians had the skills needed to provide this type of advice. The conclusion was that they did and in fact often provided adhoc advice even if they didn't focus on it as a dedicated service. When participants placed these activities on the lifecycle they were spread across three of the five areas with only one (literature searching) ending up in the discovery stage they had previously identified with.

Which services should the library be providing?
This turned out to be an interesting question. Following on from what was in the scope of the academic library there was lots of discussion about the types of service that should be provided. Again Open Access support, reference management, literature searching and citation and copyright advice were the most popular services but there was more of an even spread among the other areas. 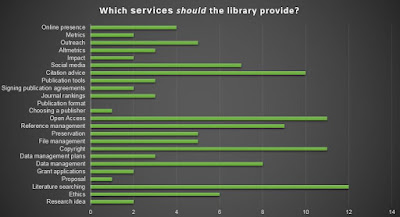 Providing advice on publication format was the only service not to be selected by any participants which needs further investigation on my part. Given that library staff felt that they had the skills and knowledge to provide this why aren't they? One suggestion was that it might be outside the scope of the library's role but it's something I've been working on addressing with training and support. Again these activities were spread out across the lifecycle when added by participants.

These results are in no way scientific and conclusive but they do point towards some interesting trends which will help me inform my future training. The most valuable aspect of this activity was in showing participants that both what they are already doing and what they would wish to do compliment the whole of the research lifecycle rather than being concentrated in one area. Hopefully after this participants would identify with more than just the discovery section of the cycle and place their token accordingly.

Resources
If you want to try this activity with your own staff as a way to open up a wider discussion or just as a way to find out how they understand their role in research support the materials can be downloaded here. If anyone does have a go I'd be really interested to learn about the results and whether they are similar across libraries or vastly different. Happy pinning!