Teaching myself some new tricks! 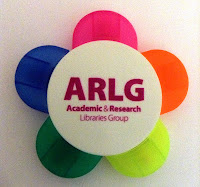 I've heard a lot of good things about TeachMeets but never managed to get to one. However I made an extra effort with the inaugural event of ARLG East and managed to attend my first TeachMeet. For anyone who hasn't heard, TeachMeets are a way of getting practitioners together to talk about what they do and exchange tips or tricks. They started off, as the name would suggest, in the teaching sector but library and information professionals have been quick to take on the idea. People sign up to give short talks of either three or seven minutes, which is just enough time to share a recent project or discovery. What appealed to me most about the TeachMeet was that it was less formal than a conference which really helped the creativity to flow. I even signed up to present, something which I usually dread! I'm happy to report though that my talk went well (at least no one threw anything so I took that as positive feedback!)

Apologies to Emma Coonan who gave the first presentation, immediately before my slot. I probably didn't listen as attentively as I should! Emma spoke about her job teaching digital literacy skills to students and how creating a visual guide has had much more of an impact. More information can be found on Emma's blog. Teaching of a different sort was the subject of Kathryn Wallis's presentation. Kathryn has recently completed a PTLLS (Preparing to Teach in the Lifelong Learning Sector) course which has helped her to consolidate her teaching knowledge. She also spoke of how it had helped to strengthen her relationship with staff outside the library who were also taking the course. Libby Tilly followed this by talking about becoming a fellow of the Academy of Higher Education which is another way of consolidating teaching knowledge. Libby said that one of the major benefits for her as an academic librarian was that the fellowship helped to put her on a similar standing to academics in her institution, a least in their eyes.

Aidan Baker gave us an outline of Gliffy which is an online diagram tool. Aidan talked about the importance of designing a library space that people will want to use and showed how Gliffy can be used to plan this. He also showed us a plan of the library he had created which mapped the classification scheme to the floor plan - very useful for all those lost students! Anna Martin talked about the important but often neglected topic of first aid awareness, reminding us that everyone should have at least a basic knowledge in a job where we a constantly dealing with people.

Catherine Reid talked about hosting drop-in sessions for users. These were informal one to one sessions which usually focused on a specific topic such as ebooks. Hosting sessions like this helped to bring staff out from behind the library desk and aided interaction with users. This was a theme echoed by Jane Helgeson who talked about her 'Librarians Let Loose' project. This initiative saw roving librarians moving into student spaces to engage with them directly. One point that really stuck with me from Jane's presentation was the idea of taking the library out to spaces not owned by the library, something which can effectively target non-users. The project was a success and will be repeated in the future.

Charlotte Byrne and Ellen Dutton both gave great examples of how technology can be used in the library. Charlotte talked about using ISSU to digitise books and letters. ISSU is an online tool which puts together PDF files into the form of an online brochure that users can flick through. This is a simple to use and cost effective method of digitisation and sharing information on the library. Ellen uses videos to teach users about various aspects of the library, such as the classification system. Today's technology has made producing videos easy and cheap and there is lots of help available online. These videos are fun and make an excellent way to get the message across - having a huge impact on users.

Libby Tilly spoke about using LibCal to take bookings in her library. This has been a fairly recent development and covers both sessions that academics book for students and those that students book themselves. The system has several advantages over other options such as being able to show how many places are left on a course. Users find the system easy to use which lowers another barrier to library use. Sarah Elsegood talked about the challenges of teaching users about next generation library catalogues. The main problem is providing an interface which meets the high expectations of users. Users are no longer passively using the catalogue but interacting with it, using facilities such as user based tagging. The next generation catalogues offer flexibility and helps different types of user to do different types of searches.

I was pleased to hear the word 'impact' being mentioned by a number of presenters. This was the subject of my presentation and something that I think libraries need to work on measuring. It's a very powerful tool which can be used to win over even the most reluctant of stakeholders. If you can convince people that something is making a definite impact on users they will find that very hard to argue with.

I've included my presentation below. This was the first time I've used Prezi and I'm afraid that I'm still not a convert. My subject was 'Measuring the Impact of Social Media' and was based on my dissertation research.

I really enjoyed the day and wouldn't hesitate to recommend the TeachMeet format to anyone. Even though I hate public speaking I found it surprisingly easy to speak and even went over my allotted three minutes. Hopefully next time I will have the confidence to take on the seven minute slot so I can actually stick to my time limit!