Public Speaking for the Terrified! 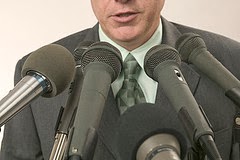 Anyone who knows me in real life will know that I am not what you would call a natural public speaker. The thought of standing up in front of more than two people terrifies me to my very core, never mind having to sound intelligent in front of a room full of every librarian in my organisation! So when I was asked to be part of a panel discussion at yesterday's libraries @ cambridge conference I said yes with more than a little trepidation. However if 2013 is going to be my Chartership year I had better learn how to push my boundaries and there's nothing like jumping in at the deep end!

Having never done anything like this before I did what any good librarian in this situation would do - I started to research tips on how to be part of a conference panel. I found a couple of reassuring resources but most focused on how to chair a panel discussion rather than how to be part of it, so I thought I would use this post to share a couple of tips for other first timers:

Being involved in a panel discussion is a way to ease yourself into public speaking. You're not up there on your own giving a paper and you can share the responsibility for questions with others meaning that you're not totally put on the spot. Taking part in a conference is a great opportunity and will look good on your CV in what is an increasingly competitive job market. It might take a lot of convincing (never mind a couple of stiff drinks) to get you up there but I promise that it will be worth it in the end. If all else fails remember that if I can do it, so can you!