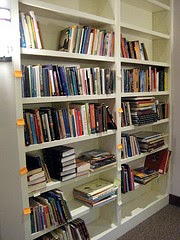 I’ve just come back from an exhausting but enjoyable two days at the CILIP Cataloguing and Indexing Group conference in Sheffield. This was my second CIG conference and I enjoyed it as much as my first experience. The theme of the conference was “the value of cataloguing” and all of the speakers more than met the challenge. I tend to blog quite full reports since I use this blog for my own records as much as anything else but I do realise that many people have better things to do than read 1500+ words on one day of a conference, so I’ve highlighted in bold what I feel are the key points.

The conference opened with a keynote speech by Dave Pattern focused on the need to measure the impact of the library. Since measuring impact is my dissertation topic, this session was close to my heart (and interests). Dave showed that there was a lot of data collected by libraries and that we should do something proactive with it. He has recently taken part in a project to try and establish a link between library use and grade amongst degree level students at the University of Huddersfield. Although he hasn’t as yet established a statistically significant link his results do indicate that there is some correlation between the number of library resources used and the final grade achieved. The study also indicated that there was a link between low library use and dropping out of courses. This could provide a useful early warning sign for both lecturers and tutors. There is still more work to be done but I look forward to reading the future results.

The first theme of the conference was “working with new standards”. Anne Welsh and Katharine Whaite discussed the history of the catalogue. They showed that even though there is a lot of concern about the MARC/RDA hybrid catalogue this is unnecessary since modern catalogues are already comprised of multiple bibliographic standards. Changing standards and different workflows over the years mean that true consistency has never been achieved and all catalogues contain a mix of record formats. In the days of active information professionals on social media, new cataloguing standards can be discussed like never before but cataloguers shouldn’t agonise too much over rule changes – everything evolves and needs monitoring. Just because a rule has been around for a long time doesn’t mean that it is above question.

Lucy Bell from the UK Data Archive discussed her work curating digital data sets. She illustrated users’ preferences for simple, Google-style interfaces but showed that these still needed to maintain a high standard of academic use meaning that they needed to be powered by powerful metadata. She explained her work in mapping keyword search terms to a controlled vocabulary language in order to give users the best access to the data possible. These controlled search terms allow more accurate usage data to be kept which in turn makes it easier to prove the value of the system to those that fund it.

Simon Barron took a philosophical perspective when discussing the impact of networked knowledge systems on cataloguing practices. He showed that many library classification schemes are based on traditional, hierarchical systems which try to subdivide knowledge in a top-down fashion. Knowledge is much more complicated than this and networks are a much better way to demonstrate links. This sort of thinking is already present in FRBR and RDA, which aim to show the multiple links between items found in the library catalogue. Whilst the technology doesn’t yet exist to allow cataloguers to represent these connections as we would like, this is still an important area to think about and I'll be monitoring future developments.

The final full paper of the morning was delivered by Michael Emly who talked about the importance of preserving collections for the future using metadata. I work in a legal deposit library where preservation is a primary concern so this was of great interest to me. He outlined a COPAC project which aimed to show through metadata if a library was committed to keeping a copy of an item. Hopefully this would mean that there was at least one copy of an item available somewhere, preserving our national collections. The metadata can also be used to make collection management decisions easier – libraries will be able to see if an item was held anywhere else and what the long term plan for that item is. Even legal deposit libraries can’t hold everything (despite what most people think) so this would be a welcome way to help safeguard items in the future.

The first short lightning round talk was an RDA update by Celine Carty and was clearly what many attendees had been waiting for. Celine was fortunate enough to be able to attend ALA and brought back a lot of important news. This time RDA is really coming, with the implementation date being set for March 31st 2013. It won’t be a matter of simply switching to the new standard – we're going to be working with a mix of standards for a while yet but this is something that most cataloguers are already used to. The rules are currently being reworded in response to feedback from users and the Toolkit is also being changed in response to criticism from testers. Celine also outlined how CIG plans to help cataloguers to get to grips with the new standard. As well as its highly successful FRBR for the Terrified workshops, the group ran an eforum for RDA discussion that was very well attended. Having been to one of the workshops I can highly recommend it!

The second lightening talk continued the theme of RDA with Stuart Hunt talking about how libraries can implement the new standard into library systems that were designed to cope with MARC. He produced a useful checklist of potential problem areas:


Katharine Whaite’s interesting talk focused on using the library catalogue as a way to understand the history of the collection and the way in which thinking about it has changed over time. She showed that librarians need to maintain existing catalogue records as well as creating new ones so that this important aspect of library history could be preserved.

The theme for the second session was ‘working cooperatively’. Deborah Lee from the Courtauld Institute discussed the progress that she has made since CIG 2010 on setting up a UK NACO funnel. She argued that this was not only a cost saving measure but that it would have multiple benefits for the professional development of those involved. Training could be cascaded down through organisations, allowing cataloguers to add a valuable tool to their skill set. The funnel also gives libraries a chance to promote authors and organisations who are important to the library’s specialism, for example by establishing a heading for an artist who is not well known but has significance. I have just started my own training in the world of NACO and I think it’s an extremely valuable skill to have. I look forward to further reports about the projects progress.

Ian Fairclough closed proceedings on day one by talking about how email lists and other tools can be used to improve bibliographic data quality. I’m sure everyone has seen the ‘typo of the day’ section on Autocat and had a good laugh but it does actually have a serious purpose. By adjusting just the mistake that appears in the list libraries can carry out low-cost bibliographic maintenance and work towards a better standard of catalogue record. Mailing lists can get the message out to a lot of people all around the world and the only cost to the cataloguer is the time that it takes to correct the mistake (which hopefully you shouldn’t find many of anyway!)

Hopefully my write-up of day two will be posted in the next few days.