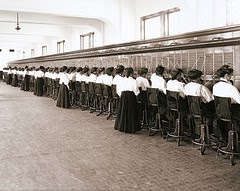 Last Thursday I took part in the uklibchat on cataloguing and classification. For anyone who doesn't know, uklibchat is a Twitter chat which is held once a fortnight and discusses a wide range of library topics. Information about the chat, future topics and agendas can be found here.


Probably the question that caused most discussion was do you think that library schools should teach cataloguing and classification or is it best learnt on the job? There were a mixture of answers to this but the general consensus was that library schools should certainly teach at least the basics. More in depth knowledge could be learnt whilst in post but several people mentioned the idea that cataloguing is a fundamental part of our professional identity as librarians. This means that it needs to be an integral part of the library school curriculum.


I agree with these statements. When I took my cataloguing and classification module at library school I was already an experienced cataloguer and so there wasn't that much that was new to me. I have to say though that I sympathised with others who struggled with the module, having had little or no prior experience of cataloguing. Cataloguing is a very difficult subject to teach 'dry' without any practical experience. It is definitely a skill that needs to be practiced to be appreciated. Having said this I am aware that there are fewer cataloguing posts available than there used to be, with a lot of the work now outsourced. This makes studying the topic in library school even more important since it may be the only introduction that many people get. This also highlights the need for enthusiastic cataloguing teachers. I was lucky that my lecturer was able to make what could have been quite a dry topic very interesting due to her enthusiasm, but I appreciate that this might not be the case for everyone. This is especially true if people are learning on the job with a line manager who already has their hands full!


An interesting question was how can catalogues and their content be made more social? My suggestion was maybe the introduction of more user tagging. I think though that this may be more a case of libraries doing what they think their users want rather than what they actually want. There are too many inconsistencies for them to be the basis of information retrieval but they could provide an added extra. I know that in my job I am sometimes cataloguing books (such as complex maths or science books) that I have problems coming up with subject headings for. A user who is actually a specialist in the subject would have more of an idea what others in the field would be looking for and so could provide valuable subject ideas. I still think that traditional subject terms should remain the main way of indexing works.

Another question asked was what is the best way to get into cataloguing? The most popular methods seemed to be volunteering or asking to shadow someone who actually works in a cataloguing department. I think this is good advice, even to those of us already in cataloguing posts. There is always more to learn and new ways of doing things. Visiting others in the profession is a great way to update your own skills and I hope to be doing some of this myself in the near future. Just not sure where/how I am going to fit it in!


The issue of how to help people who have the desire to learn cataloguing but no opportunities to do so was raised. I'm fortunate enough to have the option of visiting others but I know that for many this isn't practical. There were many suggestions for some kind of online training and it sounds like CILIP CIG is on the case. Hopefully this will lead to more opportunities for people to learn cataloguing and classification.


What developments do you expect in how library catalogues are presented to users? Most people thought that Google style interfaces would become more the norm and I think that we are starting to see this in more and more libraries. It's what users are used to and what they expect and I think that this is one trend that librarians are going to have to accept.


A question which got me thinking was what is the best classification scheme for an academic library? Many different suggestions were put forward on the best scheme and I don't think a consensus was reached. Cambridge has its own unique system and it's the only one I've ever used (as a cataloguer). The question did get me thinking about the pitfalls of a library having its own system and multiple systems being used in libraries in general. Does this prepare users for finding information? Students at Cambridge have to use multiple schemes across different college and faculty libraries and I'm undecided about whether this is a good thing or a bad thing. On the one hand, if they only had to use one system this may make it easier for them to find resources across the libraries. On the other hand, having different systems can encourage them to actually use subject indexing to look for the resources. I'm sure there is no one perfect answer and the best method is something which makes it as easy as possible for users to find what they need.


There were other topics covered but I feel that I have gone on long enough! ukclibchat posts excellent summaries of their chats so I advise anyone interested to have a look there for a more thorough discussion of the issues.