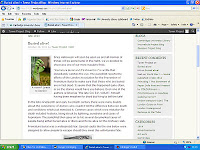 On the left is a screenshot from my seasonal Halloween blog post for the Tower Project Blog. Please take a look if you want something macabre to read tonight!

Blogging is just one part of my job with the Tower Project but I really like how it gives us a chance to showcase some of the material that people might not otherwise get a chance to see. It shows people what we do behind the scenes and helps to demystify cataloguing a bit. Not everything about working in cataloguing is boring! There are not many jobs where you can say you spent the afternoon researching premature burial...

Happy Halloween!
Posted by Claire Sewell at 10:25 No comments:

So we reach the end of another 23things! Maybe I should change the name of this blog to Librarianintraining46things...

I have thought about changing the name of the blog from time to time now that I am nearing the end of my degree course. I've decided against this however since I think the name illustrates that we are always learning, we never stop over our careers. This is what cpd23 has been about for me - developing my skills as part of lifelong learning. Technology is just one aspect that those in the library profession should keep up with, otherwise we risk getting left behind. You can't just learn something once nowadays, you have to keep topping up knowledge and gaining new skills otherwise you will be left behind, with both users and colleagues.

Here is my personal SWOT analysis:


Weaknesses: knowing that I should embrace change, but being scared to actually do it, shyness (which doesn't help when it comes to networking)


Opportunities: learning programmes like cpd23, training provided by work, conferences and outside events


Threats: current state of the job market, increased competition for jobs, future of libraries in general (!)

I'm not sure what I can do to change some/all of these things but I'm going to work on it. You don't get anywhere by sitting and letting chances pass you by. This doesn't necessarily mean getting a new job but could be things like using every opportunity to improve my skills.

One thing that I will definitely do is keep up this blog. Posts might not be as regular as they have been over the course of the programme but when I have something relevant to say I will try and post something. I think that blogging is a very valuable tool for librarians, especially those that feel they might not get a voice otherwise. It's also quite therapeutic! Hopefully I will find something interesting to say in the future. Hopefully this blog can become a reflection tool for me which will help when come to start my chartership in the not too distant future - gulp!

Posted by Claire Sewell at 20:54 No comments:

The need to volunteer?

Getting caught up finally! Thing 22 talks about volunteering as a way to get experience in areas that your job doesn't cover. While this sounds fantastic in theory I have no idea how I would fit it in in the real world. I have spent the last few years trying to get a full time job so there is no way that I would willingly choose to work part time. Even in the periods that I have been working part time at the library I have had to go and get another job in order to pay the bills so volunteering just wasn't an option. If you can afford to do it I think it's a great use of time but unfortunately it's not possible for everyone.

There are ways round this. You could ask your current employer for more responsibility on a sort of voluntary basis. However, I think you have to be careful not to be taken advantage of here. I have managed to increase my skills recently by attending conferences and getting more involved in the profession in general. Presenting a poster at Umbrella was as much about improving my public speaking skills as anything else and it was a very rewarding experience.

I think volunteering is something that employers definitely respond to since it shows that you are willing to go out there and go the extra mile to learn something new. However, they also need to be aware that not everyone has this luxury and that people may go about gaining experience in different ways. I think that as long as you can gain skills somewhere this will help you in your future career, for example just involving myself in following cpd23 shows that I am interested in developing new skills. Hopefully this will be enough for now.
Posted by Claire Sewell at 11:35 No comments:

I have more recent experience in job applications and interviews that I care to think about, but given my current success rate I am more than happy to get some extra advice. I think it's always important to carefully read through the job description to see what it is that employers really want. You need to tailor your skill set to what they want and this is going to be different for each and every job. I think that one of the biggest mistakes that people make in applications is turning in the same thing every time, just phrased in a different way. Almost all my experience is in cataloguing. I have applied for many, many jobs in cataloguing and got used to phrasing the same thing in a new way every time since cataloguing was so central to the roles I was applying for. It's only recently that I have started applying for jobs outside cataloguing and have had to really think about what else I need to put in my application.

I would say that one of the best pieces of advice I have been given is not to over-prepare for interviews. Some people go into interviews with answers already rehearsed to certain questions. This is great if these questions get asked but if not then you run the risk of giving you very carefully rehearsed answer when they interviewer has asked a totally different question. I'm also pretty sure that they can tell when you have rehearsed too much and one of the points of an interview is to test how you can think on you feet.

The best things to do in order to prepare for an interview, in my opinion, are:


Interviews are very scary things so the other bit of advice I will give is to get yourself a treat afterwards. This way you have something to look forward to even if it doesn't work out this time. And if you don't get the job, just remember that it's their loss!
Posted by Claire Sewell at 08:18 No comments:

Going back to my routes (or why you should always listen to your mother!)

Getting slightly behind in my "Things" but I'm afraid that real life has been getting in the way! This weeks Thing asks us to look at how we ended up working in the sector that we work in. My story starts with listening to my mother. Like all teenagers I didn't listen to what she said for most of the time. I didn't have a burning ambition to 'do' anything in particular. I studied history at university since it was something I was interested in but I didn't do it with the idea of making a career out of it. I thought about maybe working in museums but only as a vague idea.


It was my Mum who suggested libraries. She said "you like books" which at the time seemed the best prerequisite for working in a library. She thought that it was something I would be good at and something I would enjoy. I applied for a few jobs when I left university, one of which was in Cambridge University Library. Eventually I got the job and thus my career in libraries began. I began as a library assistant and have progressed to a position in cataloguing, which I really enjoy.


I found that there was a distinct lack of enthusiasm from anyone (apart from my mother) about working in a library. I vaguely remember some sort of dusty information sheet on the bottom of the pile in the careers section of my secondary school library but that's about it. I spent a lot of time in libraries when I was growing up as my family encouraged me to be an avid reader. It's an environment that I enjoy but through my work I have found out that it is, of course, about so much more than liking books and being able to operate a stamp! I like that I can spend my time working on something I feel passionate about and helping to share this with others. Isn't this what jobs should be about in an ideal world?


I didn't realise that there were qualifications that you needed to be called a librarian, an attitude that I find reflected in others when I tell them about my library course. They always, without fail, ask "why do you need that?". There does seem to be a misconception that all we do is fetch and stamp books. In my opinion, one of the best ways to change this is to get out there and show people the broad range of things that working in a library can offer.


I don't want to steer away from the word 'librarian' but there are so many job titles out there in libraries that have much less negative connotations, things like 'metadata specialist'. I have recently met people from all over the librarianship world and hardly any have the same title or do exactly the same thing. There are many different aspects to the profession and I think that this is something that isn't stressed often enough. People see it as a quiet job rather than just a profession, which is why they can't understand the need for a degree. I have met so many enthusiastic people who are pursuing librarianship as a career. Hopefully they (and maybe even me) can help to inspire the next generation!


So far my career has consisted of working in different departments in the same library. It's an academic library and this is where I would very much like to say. Recently I'm starting to get itchy feet, not for a new job necessarily but with the urge to do more. That's why I've been involved in cpd23 and some other projects, like library outreach. I always thought of myself as picking the one thing that I loved about working in a library and then getting on with it but now I see that there are so many exciting opportunities and there is no harm in getting involved (except a lack of sleep).


The moral of this extremely long and rambling story is that maybe you should listen to your mum once in a while. Sometimes they really do have a clue! It seems to me from reading the posts of others that once someone suggested that they should work in libraries it was like a light bulb went off and they wondered why they hadn't thought of this before. By not promoting librarianship enough, I have to wonder how many people are missing out on a fulfilling career? Maybe if you suggest it to someone who isn't quite sure of their career path in the future you will be creating the newest library superstar?
Posted by Claire Sewell at 13:45 No comments: