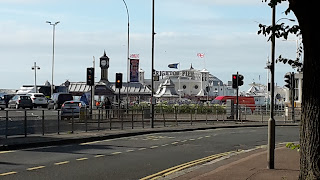 I really do like to be beside the seaside, especially with a group of librarians on Brighton Pier! Although chasing my colleagues around on the dodgems was fun there was also a serious side to the recent CILIP Conference and I felt that I came away with a lot. In this post I'm just going to focus on the keynotes or I will be here forever.

The most inspiring talk for me was given by Scott Bonner, Director, Ferguson Municipal Library. Most people will remember Ferguson as the site of violence following the shooting of unarmed teenager Michael Brown by a white police officer. During the crisis that followed Scott and his team kept the Library open to the local community, often in the face of personal danger. Teachers began to use the Library to hold classes, ensuring that local children still received an education when the schools were closed.

Scott talked about the need for libraries in times of crisis, a theme that was echoed throughout the conference. He pointed out that "libraries are awesome all the time" as we do a lot for the communities that we serve, Ferguson was just one extraordinary example. He acknowledged that he made mistakes with his approach such as choosing to close the Library at one point but he learnt from them and took those lessons forward in dealing with the crisis that unfolded.

One major decision was what the library would be during this time - did they remain a library, become a school or try to find a middle ground? Ferguson did the latter and found a workable middle ground that helped the community it served. This was the undercurrent of Scott's message - libraries do what they can to provide for their communities in emergencies and everyday life. It's hardly the same thing but Scott's talk made me think of the refuge that academic libraries can provide to students in exam term. Sure we're a place to study but we also provide a place to take a break, sleep (!) or a shoulder to cry on in some instances. As Scott pointed out libraries can be a "quiet oasis" in stressful times and I think this is often an underestimated service. His powerful message also made me think about the current Brexit crisis and it's implications for the academic community. I'm not sure yet what libraries can do in this context but I can bet we will be (and already are) doing something!

A Storify of tweets from Scott Bonner's keynote can be found here (many thanks to Emma Illingworth for compiling).

The second keynote was from Professor Sir Nigel Shadbolt who talked about 'The Challenges and Opportunities of Open Data'. This is an area I've come to know quite well during the past few months in my new role within Scholarly Communication. Shadbolt highlighted some examples of historical open data use such as Snow's Cholera Map which showed that the disease was spread via water pumps. He also talked about modern uses of data such as Transport for London who made their data available to others who then built travel apps which many people use on a daily basis.

Whilst the overall message about open data wasn't new to me (and others in the audience and online) it was news to some. As I was coming out of the talk I overheard many people talking about how they hadn't seen things in this context before and how they were going to look into the area more. The keynote could be seen as preaching to the choir as information professionals really should know about these things but I don't think it deserved all the criticism it gained. The CILIP Conference attracts a range of people from across all sectors who may never had a chance to hear this sort of information before. I work in a major academic library and I know many colleagues who don't know about this area - it's one of the reasons my job exists at all. I know about it precisely because I've been to events like this and learnt about it, otherwise I would be just as clueless. My point is that everyone has to start somewhere and sometimes you have to go back to basics to get people interested. If the keynote has educated some people then it did it's job.

Once again a Storify of tweets by Emma Illingworth can be found here. 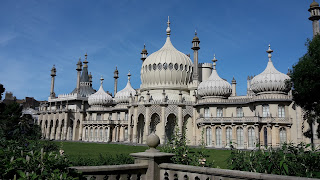 The final keynote came from Lauren Smith, a researcher in the information world. This keynote really brought together the conference as Lauren echoed Scott Bonner's comments by stating that libraries weren't waiting for a crisis to act - we are IN a crisis situation right now. With Brexit, the state of the UK government, service closures and issues surrounding immigration and refugees this is our time of crisis. Lauren called on information professionals to remember that libraries are political, they tackle issues of socio-political divides and unequal access to information. Although we are safe spaces we are not neutral as we provide a place for people to go to access information on topics that others might consider dangerous. Information professionals are there to provide access to information, not to judge.

Again I heard many comments as we were leaving the hall. Some colleagues complained that it seemed a strange note to end a conference on - at times it wasn't a happy and upbeat message. However I would argue that it was a message that got people thinking and talking long after Lauren left the podium. This is a sign of a good keynote and a good conference. Rather than taking the safe route by reassuring us that everything was perfectly fine it gave us a kick and made us take notice. Well done to CILIP for being willing to hear this message and well done to Lauren for delivering it.

A video of Lauren's speech can be found here (via SL McDonald).

Overall it was another great conference. It was also the first conference I feel I've attended as a 'proper professional' - I have a permanent role and this was a work sanctioned rather than self-funded trip. Hopefully this will continue long into the future - I can't wait for CILIP 2017!

Posted by Claire Sewell at 13:10 No comments:

IFLA - Why I wanted to attend 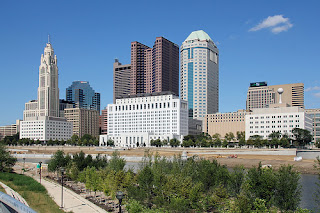 This is the second in a series of posts about my experience of IFLA WLIC 2016. Other posts can be found here.

In this post I'm going to explore some of the reasons I wanted to attend IFLA. I can predict the answer people are currently shouting at their screens: "you're getting a trip to another country!". Well yes, it would be silly not to acknowledge that this was part of the attraction of applying for the bursary but it wasn't the only reason. Attending IFLA WLIC is my first chance to attend a major international conference. Many people assume that because I work at Cambridge I get money thrown at me to attend conferences and events all the time but we have the same financial constraints as everyone else. Almost all of the events I've attended have been due to bursaries or have come from my own pocket. There is no way I could afford to attend a conference abroad without assistance and I have been applying for bursaries to a range of events, including IFLA, for years. In 2016 I got lucky!

During my research for all of these applications I read the blog posts of previous winners who have had a chance to attend IFLA. Each person had different experiences but they all came away feeling inspired which is something I very much look forward to. Whenever I've attended conference at both a local and national level I have come away feeling inspired by the people I've met and the ideas that have been shared and I think that an international conference can only add to this. In my professional life I mainly come into contact with colleagues from the academic sector but I'm hoping to talk to those from across other sectors at the conference as I think we'll have much to learn from each other. Part of my role involves overseeing training for librarians from various Cambridge libraries (there are quite a few of them!) and I'm particularly interested to discover the different approaches to training that people use so that I can bring back some new ideas. I'm still relatively new to the world of scholarly communication but I know it's a growing area of interest in the profession. I'm hoping to talk to other attendees working in the same area about how they have developed their presence in the library. One thing I am especially interested in is securing staff buy-in with scholarly communication. Hopefully I'll be able to gain some insight and bring this back to Cambridge (and the rest of the library community).

Attendees also talk about the different experience of attending a major international event. Many call them overwhelming due to their size and scope. I'm not someone who normally thrives in situations like this but I know that I need to learn more about networking and putting myself out there. It's part of my role and part of the profession and is something I have been working on for the past few years. I'm not sure if or when I will ever get to attend an event of this size again so I'm going to make the most of this opportunity to develop my skills in this area. Nothing like jumping in at the deep end to make everything else seem less scary! Being in charge of professional development activities for library staff in my current role it's important to me personally to set an example and demonstrating a confident presence at an international conference would be an important step towards achieving this goal.

Following on from this on a more personal level this conference would give me a chance to make an impact in my workplace. My department has existed for less than two years and my role is a new one to the library. Whilst I'm excited about being part of providing professional development opportunities for staff it is a big responsibility (and hopefully one I can live up to) and I need to take a strong leadership role in order to make this a success. I've learnt a lot about leadership over the past year in the Leadership Programme and I'm looking forward to putting it into practice at the conference and beyond. IFLA will be a valuable chance to talk to world leaders in the information profession and I hope that this will help me with my own leadership journey moving forward.

As you may have guessed after reading this far this post is adapted from a section of my bursary application. I'm not holding it up as the perfect example by any means but at least people can see what I wrote. Hopefully if you are applying for similar opportunities in future this post will give you some pointers on where to start.