Recently I was lucky enough to be accepted to the CILIP Leadership Programme. This is a new programme which CILIP are piloting in 2015-16 in order to increase the leadership capacity within the profession and is based on similar models offered by other associations. The programme will involve face to face meetings, online learning and group project work. The launch of the programme was held last week just before the CILIP Conference in Liverpool.

There are twenty-one participants in all and I was pleased to see a large range of sectors represented. Meeting face to face in this way helped to break the ice and it was really interesting to hear about what people did and what they were hoping to get out of the programme. Quite a few of the participants were there for the same reason as me - to develop confidence in their leadership skills - but it was also reassuring to hear other people's reasons for taking part. It reinforced the idea that leaders can come from anywhere and there is no one special skill that people are born with. 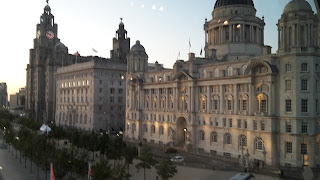 This was something that we discussed at length. After a noisy getting to know you exercise where we shattered the illusion that librarians are quiet we discussed what makes an effective leader. There were a lot of common themes suggested such as someone who is inspiring, approachable and consistent. This very much fits with my idea of a leader but it was interesting to hear what others thought. For example some thought that leaders were those that were good at succession planning to ensure the future of their organisation, something which had not really occurred to me before. We also had a group discussion on how leaders are made. Out of all the options presented I was drawn to the social script option which claims that leaders arise when the situation requires them. This is very much how I have seen my own leadership journey as I never considered myself a leader but like to think I can step up when needed.

We also looked at different leadership styles and their associated advantages and disadvantages. This is something I was quite familiar with through my work on the ILM Leadership Course but it was useful to have the discussion in a library context. I think that all leaders have a tendency towards a particular style but most people are able to adapt it to different situations (known as situational leadership). Having all the styles outlined for me highlighted the importance of this type of training to all leaders as you may not fully realise the disadvantages of your natural approach or indeed the advantages of other approaches. For example I think the term autocratic conjure up certain negative images but in a crisis situation this type of leadership can be very useful. 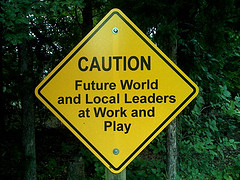 The next session was a chance for several key members of CILIP to share their own leadership stories. CILIP CEO Nick Poole never set out to become a leader. At the start of his career he made use of every opportunity to talk to leaders about what they did and why they did it. He built his skill set both through work and by taking CPD opportunities such as committee work. Nick also stressed the importance of work/life balance, something I think even the best of us forget at times. CILIP President Jan Parry spoke of how drama lessons helped her to overcome a childhood stammer. To me this was an important lesson in thinking outside the box to solve problems and gain valuable experiences. As an adult Jan was involved in local politics and learnt a lot from observing those around her, something which seemed to be a key theme from all of the talks. Finally Simon Edwards (Director of Professional Services at CILIP) spoke about imposter syndrome, something I know I’ve struggled with. I was also really pleased to hear his shout out to cataloguers! Simon spoke of an everyday kind of leadership. We cope with change and difficult circumstances every day and we shouldn’t underestimate how these feed into leadership potential. He advised creating a career map to show what you have done and what you want to do. This is something I plan to do as I think it will help to consolidate my past (and hopefully future) achievements. At lunch there was another opportunity to observe leadership in action as we were joined by the CILIP Board.

The last part of the day involved the initial planning of our group projects. These will be a key component of the programme and a chance to put theory into action. I am involved in looking at the Member Network CPD offer. As I’m very interested in CPD this project really appeals to me but I think it will also be a chance to test myself. As well as challenging myself with aspects of the project it will force me to think beyond what I consider CPD and look at the point of view of others. I’m really looking forward to getting started!

The next time all the participants will meet face to face is at CILIP HQ in November. In between there are lots of opportunities to interact online as well as additional training scheduled in the form of webinars and online chats. I’m really excited to be involved in the inaugural year of this programme and I hope that my input can help shape it for many years to come. So far it has really rejuvenated me professionally so I’m looking forward to seeing how much further it can take me.